Tate Britain’s magnificent Barbara Hepworth retrospective Sculpture for a Modern World ends this weekend. If you haven’t seen it, drop everything and make a beeline for Milbank. You won’t regret it.

Not only does this show explore and celebrate Hepworth’s extraordinarily powerful work but also her position as one of Britain’s greatest artists. A leading figure of the international modern art movement of the 1930s, Hepworth would become recognised internationally as one of the most successful sculptors in the world during the 1950s and 1960s.

She died in a fire at her Cornish home and studio in 1975. She was 72 -years-old, a towering figure who despite failing health was revered and perhaps a little feared by the art world.  It had been an intriguing journey for this singularly talented artist – a strong and determined Yorkshire woman who had first made an impression with a series of striking carvings back in the 1920s.

Within a few years she was exploring more abstract forms. World War II found her moving  with her second husband Ben Nicholson from their London base in Hampstead to the safety of Cornwall. It was a period of personal upheaval and artistic reassessment. Drawing parallels with the rugged landscape of her Yorkshire childhood, Hepworth found an instant affinity with the wild Cornish coast and began making worked that responded directly to her environment.

This exhibition, which features over 100 works from her major carvings and bronzes to less-familiar pieces, traces Hepworth’s development as an artist and also examines the different spaces in which she presented her work.Alongside works in wood, stone and bronze, the show features fascinating photographs that have never been seen before in public, rarely seen textiles, collages, film and selected works by both her peers and predecessors from Jacob Epstein to Henry Moor.

The Tate show brought  to mind a feature I wrote a few years ago about Hepworth’s famous garden in St Ives. This is a version of that piece which included an interview with art historian, author and Hepworth expert Miranda Phillips. It was originally published in Cornwall Life magazine. It might give you an idea of the uncompromising battle that Barbara Hepworth fought to stay true to herself and her art.

Walking through Barbara Hepworth’s strange and wonderful sub-tropical garden in St Ives it’s hard to imagine that it was once little more than a work-yard where the sculptor created some of the most radical works of the 20th century. The lush exotic plants and swaying palms that create such a magical setting for her powerful and instantly recognisable sculptures seem to have been there for ever. They delight the tens of thousands of visitors who each year seek out Trewyn Studio, her old home, long preserved as The Hepworth Museum and Sculpture Garden.

It’s easy to assume that it was this garden as much as the discreet facility offered by the studio’s town-centre location that drew Hepworth here in 1949. After all she’s inextricably linked with the place. She lived, worked and eventually died at Trewyn. Her death at the age of 72 was caused by a fire believed to have been started by a dropped cigarette end. It sealed her association with this house forever. To this day her studio remains frozen in time exactly as she left it. The date of her death – May 20th, 1975 – is still on the wall calendar.

In fact her initial interest in Trewyn was purely in finding a suitable space to work. She had just separated from her second husband the painter Ben Nicholson and had been invited to produce  two major commissions for the forthcoming Festival of Britain. Trewyn was the perfect answer. Hepworth had enjoyed a growing reputation among the artistic elite in London but the birth of triplets – Simon, Rachel and Sarah – and the outbreak of World War II had temporarily derailed a glittering career. As German bombs threatened to rain down on the capital she and Nicholson decided to move their family to the relative safety of Cornwall.

Living in Carbis Bay they soon became central to what would become St Ives’ golden era as an artist’s colony. It wasn’t always easy. Nicholson could be autocratic and controlling and Hepworth, not the easiest person herself, was forced to put domestic chores before art. The breakdown of the marriage and the move to Trewyn gave her the freedom to fight her way back into the public eye. With international success came the opportunity to re-model her working environment and in the mid-1950s Hepworth set about transforming the blank canvas that was the Trewyn garden. Over the next few years it slowly turned into what art historian and author Miranda Phillips describes as  “almost a showroom for potential buyers and people who might commission her.”

To achieve this Hepworth took advice from her good friend the modernist composer Priaulx Ranier and also Will Arnold-Forster who had established a marvellous garden at  Eagles Nest, the house high above Zennor  that would later become the home of the artist Patrick Heron. Arnold-Forster was a well-travelled retired Colonel who had written the influential 1948 book Shrubs for Milder Counties. Ranier meanwhile possessed an encyclopaedic knowledge of plants both from her native South Africa and across the New World. Hepworth could count on extraordinarily informed advice to help plant a garden that would perfectly  combine the beauty of natural forms with the strange power of her stone and bronze sculptures. A wonderful mixture of the traditional and exotic gradually took form as the garden was landscaped and planted with fan palms, bamboo, honeysuckle  magnolia, eucalyptus, Japanese anemones and roses. Rockeries were built, paths laid and an old pond rescued and given new life. The result combined with Hepworth’s sculptures was a mesmerising display of colour and form that continues to evolve to this day.

Miranda Phillips has worked closely the Tate and the  Hepworth Museum for nearly 20 years and is an acknowledged expert on the garden.  She is the author of Barbara Hepworth Sculpture Garden (Tate Publishing). Written nine yeas ago with curator Chris Stephenson,  the book was developed from a popular guide she had put together after being constantly quizzed about the plants in the garden by visitors to the museum.

It records of the plants at Trewyn through the seasons and examines their relationship With Hepworth’s sculptures. It continues to sell steadily in the Tate shops

“People are constantly fascinated by the garden,” she told me. “Hepworth certainly used it to impress potential buyers but the sculptures she sited here were very much her own favourites. Phillips believes that Hepworth used the garden – “with its spiky primeval forms and the ancient nature of some of her sculptures” – as a source of inspiration. “Placing her works in this setting with the interplay of light,shadow and movement allowed her to see how different sorts of light and even dry and wet conditions would work on the sculptures. I’m sure it influenced her art.” 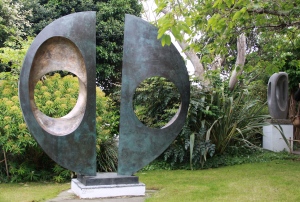 On a bigger scale the rugged and ancient Cornish landscape was her inspiration too. Hepworth had originally fallen in love with large sweeping vistas as a child in Yorkshire. In Cornwall she was able to rediscover the feel for weathered rock, lichen and windswept heathland that had been hardwired into her infant soul. Trees twisted by the wind and storm lashed beaches provided a wealth of material.

Despite her great achievements –  internationally feted as an artist  and made a Dame of the British Empire in 1965 – Hepworth did not have an easy life. Her work was physically tough and she also endured two divorces, the death of an adult child ( her eldest son Paul died in an air crash in Singapore in 1954) and terrible health problems. By the end of her life she had received treatment for throat cancer, was almost crippled by a fractured hip and her hands were full of arthritis. She was also heavily dependent on pain killers and drinking heavily. “I think she ran on nervous energy, drove herself terribly hard and wasn’t particularly interested in physical comfort,” says Phillips. “Beyond her work she didn’t have much time left for living.”

The general assumption is that the fire that caused her death was the final ghastly chapter in an increasingly miserable existence. Phillips sees it slightly differently. “There was actually very little fire. It caught some plastic.” She believes Hepworth was probably already asleep and succumbed to fumes.  “To be honest life wasn’t going to get any more pleasant. She was already in great pain and she wasn’t going to get better. To go in the place that you love surrounded by the things that you love is no bad thing.”

This site uses Akismet to reduce spam. Learn how your comment data is processed.